In between racing about in my car to Norwich and Mum’s house, the doctor’s surgery and the hospital, shopping trips to Harleston, Halesworth, Bungay and Diss, I have been able to take my camera with me as I walk round the garden, filling all the bird feeders.  I haven’t had time for any gardening for about ten days and I miss it!  The weather here has continued bright and dry with frosty, misty mornings and warmish days (as long as you are out of the chilly NE wind).  Today has been much warmer with a change of wind direction but according to the forecast, this will not last.  Rain and cold are set to return by the end of the weekend.

A Daisy (Bellis perennis). I love its simplicity. 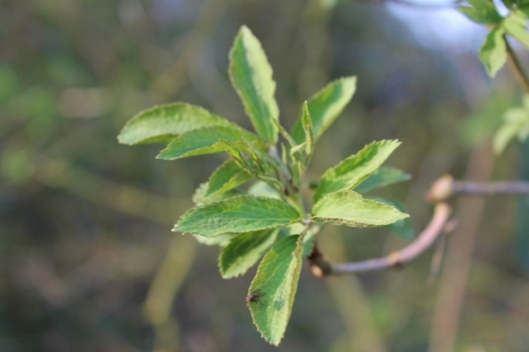 The Elder leaves (Sambucus nigra) are now almost fully out and have lost the pink tinge they had. They are matte mid-green leaves.  Last year we had the best elder blossom I’d seen for many years.

Goat Willow or Sallow catkins (Salix caprea). Male and female catkins are on separate trees and appear before the leaves. Sallows are a food plant for many different types of moth. The catkins are known as ‘Pussy Willow’ when they first appear as they look and feel like silky cats paws. 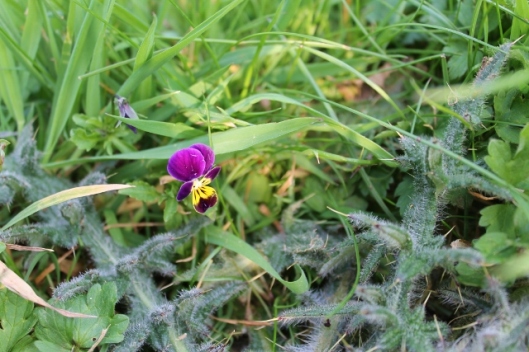 I found a Heartsease or Wild Pansy (Viola tricolor) plant on the path round the big pond. Next to it there is also the first rosette of Spear Thistle leaves (Cirsium vulgare).

I love standing underneath our tree and looking up. Silver Birches eventually grow to be about 26 metres tall. I don’t think ours has quite got there yet.

This Bluetit (Parus caeruleus) sitting in the Birch tree looks a little strange. It has a black sunflower seed in its beak.

It spent some time taking the seedcase off… 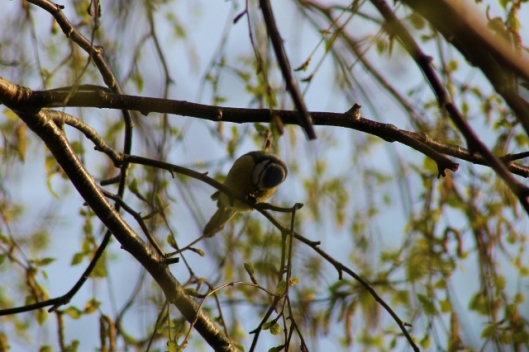 …and eating the seed within. 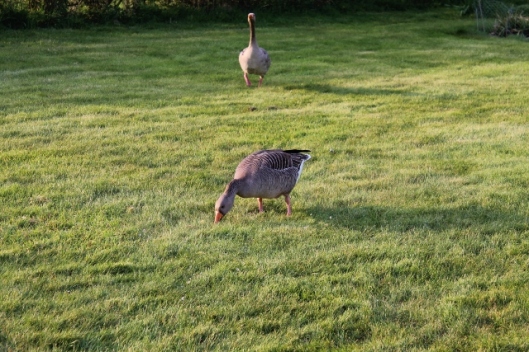 The Greylags (Anser anser) have been amusing me a lot lately. The geese are much calmer than the ganders. The goose here is up close eating some food I put out for it. The gander is further away and hissing at me. 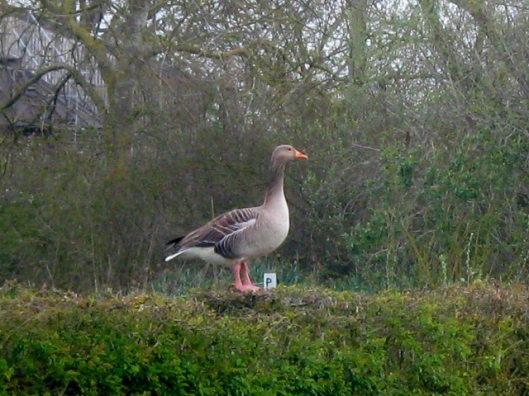 This one I found the other morning standing on top of the hedge.

The original goose on her nest on the island… 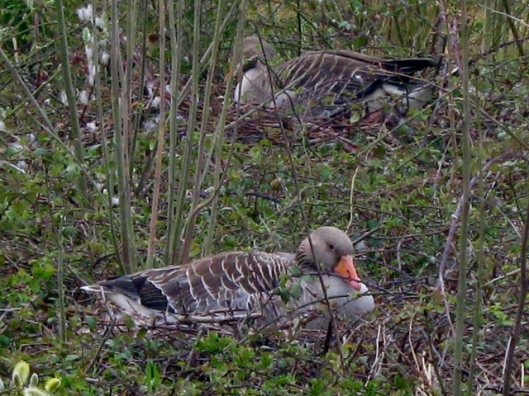 …was joined last weekend by another goose (nearest to us).

A third goose has made her nest on the edge of the pond. I surprised her and she surprised me when I walked round the pond yesterday. I am not sure how successful this nest will be as it is quite vulnerable to fox predation. 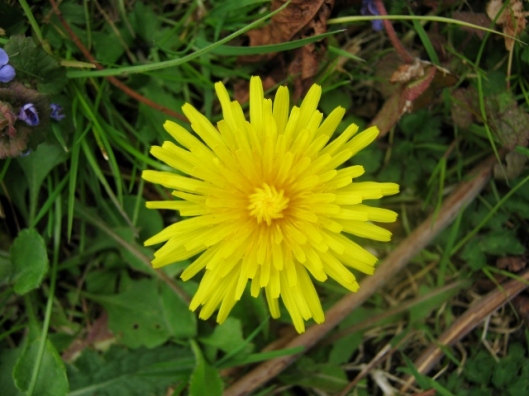 Daffodils along the ditch at the front of the house

Daffodils at the top of the ditch between us and the old School House. 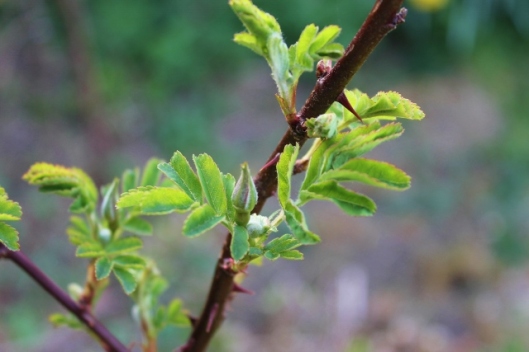 Richard pointed out this snail trail up the side of the house!

I saw this Muntjac deer doe very early the other morning. It was eating the crabapple tree! The leaf shapes on the window are meant to stop birds crashing into the glass but aren’t very successful. I usually have to pull the window-blind down to stop them! 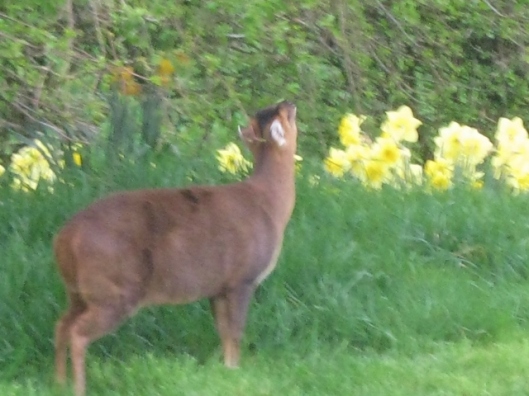 Very blurred photo! You can see how stocky/thickset these deer are and also the white in their ears.

The does don’t have antlers but have a dark triangular patch on their foreheads.

I think I see her tongue sticking out as she chews a mouthful of leafy twig.

Richard on his new tractor-mower. The old one wasn’t working too well so we part-exchanged it for a newer, better model. It has a mulching facility which will be good to use in the summer.

I must share some good news I heard today.  My daughter Alice has been told she has her PhD.  She is now Doctor Alice!  I  am so proud of her.

Here are just a few photos I have taken over the past week in my garden.

I looked out of one of the bedroom windows early in the morning and saw this muntjac resting under our hedge.

We have had large congregations of geese in the field behind the house.

Another picture taken from an upstairs window of two graylags and two mallards feeding under the birdtable.  The birdtable is leaning a bit because of the high winds we have had and also because twenty or more rooks descend on it early in the morning and their weight causes it to list. 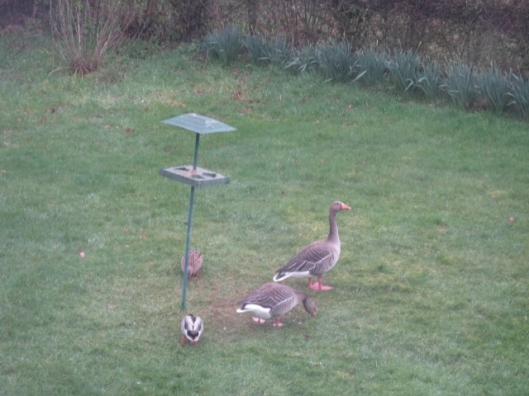 The greylags have started laying eggs on the island.

A couple of photos of the greylags swimming on the pond. 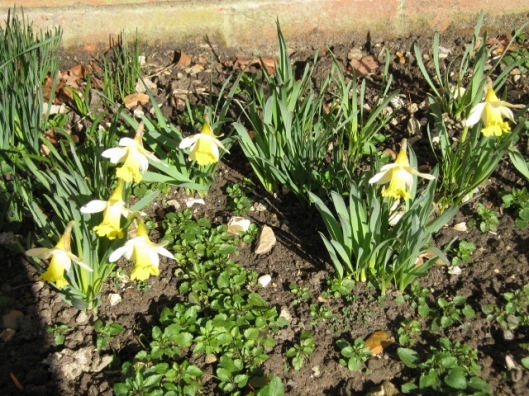 And some rather stunted hyacinths.

Some cuddling, sunbathing chickens.  The cockerel forced himself inbetween the hens to get the warmest place.  The hens didn’t seem to mind – just look at their faces!

A bluetit hiding in the hedge.

And a lovely sunset.

I have had a busy week with hardly any time in the garden and no time to add a post to my blog – until now.  The weather has been a little better this week – good for all the young people on their half-term break.

Wednesday 19th Feb:  A beautiful orange sunrise – a pleasant mild day with lots of cloud and some sunshine.  A returning to Sheffield today so she came with me when I took my mother shopping in Diss.  We took her to the station after getting the groceries and waited with her until just before her train arrived.  She texted later to tell me what a long and unpleasant journey she’d had.  A landslip between Chesterfield and Sheffield meant that she had had to change trains at Nottingham.  Over an hours wait for the new train to arrive and then a long circuitous route to Sheffield avoiding the damaged track.  A dislikes travelling at the best of times – delays make her doubly grumpy (don’t they A?!)

Thursday 20th Feb:  Rain overnight and a cloudy, gloomy, breezy morning.  While R and I were drinking our morning tea we watched a deer wandering through the garden – probably muntjac though might have been roe; couldn’t see clearly.  Heavy rain followed by rain showers today.  Did lots of food shopping and then lots of ironing.  Watched a pair of deer grazing in the field on the other side of the lane at the front of the house.  The sky cleared after dark.

Friday 21st Feb:  A beautiful clear bright morning – almost a frost.  Water droplets had become gel-like but not frozen.  As the sun rose everything shimmered and sparkled – heavenly!  Took Mum to the eye clinic at the Norfolk and Norwich hospital again to have another injection in her eye.

Poor lady has glaucoma, cataracts and macular degeneration and the injections are for the latter.  Her eyesight was so good until fairly recently.  She now finds reading, knitting, sewing difficult as well as all her household chores.  She it was who taught me to be observant, teaching me when I was tiny the names of flowers and birds.  I remember her showing me how to colour pictures with the natural dyes from grass and flower petals while we were on a camping holiday.  She pointed out bilberries to us all when we were walking across the North York Moors.  All we could see were rabbit droppings at first so that was what we called rabbit droppings ever afterwards.

Surprised at the large number of dead deer at the sides of the road.  Noticed bumble bees flying in the garden this afternoon.

Saturday 22nd Feb:  Another lovely day – more bumble bees about.  I managed to take a few photos of flowers in the garden this morning while R was trying to do something about filling in some of the deep holes and ruts made by the JCB.  The elder tree is coming in to leaf.  I am so pleased we have an elder tree as I love the frothy flowers in mid-summer and the beautiful berries in the autumn.  I really like elderflower cordial and the flowers also go well with gooseberries – they are in season at the same time.  Elder trees are traditionally magical – some traditions have them as evil trees and some as good.  In some parts of the country it was thought best to ask permission of the tree before pruning it or taking anything from it. Boggarts are thought to live in Elder trees.  (I remember reading ‘The Boggart’ by Susan Cooper to A when she was little).  Elders are very useful trees.  Flies do not like their smell so they were often planted near to cottages – larders, kitchens, dairies, outside lavatories!

R and I decided to drive to Dunwich and walk on the beach this afternoon.  It wasn’t as busy as we thought it might have been seeing as the day was so fine.  Lovely rolling waves –  R pointed out the hissing noise the pebbles make as the water recedes before the next wave rushes in.  What a good work-out for leg muscles walking on deep shingle beaches is!  I found a mermaid’s purse,  a dogfish egg case, and gave it to E when I got home.  We saw a little egret fishing in a pool near the shore.  We drove home as the sun was setting – the trees, black silhouettes, showing every twig and growing leaf bud against the pale sky.

View out to sea 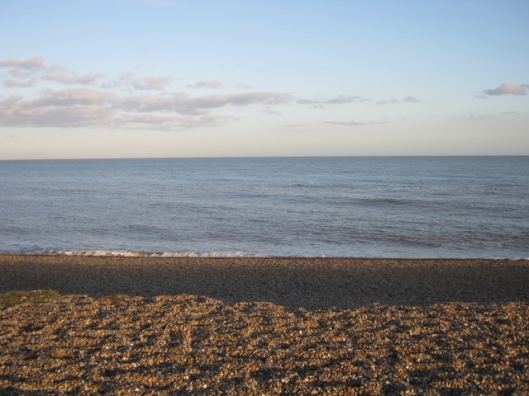 Stonecrop, rope and other bits and pieces above the strand line 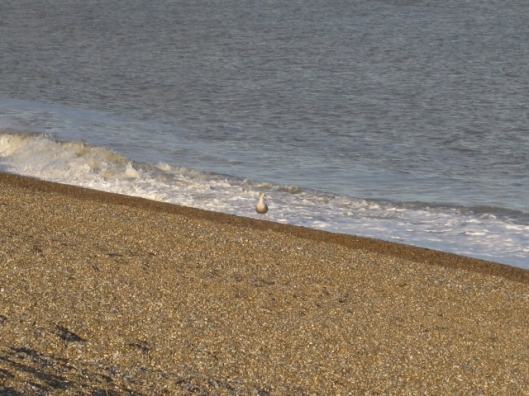 View inland from the beach

Little egret in the pool 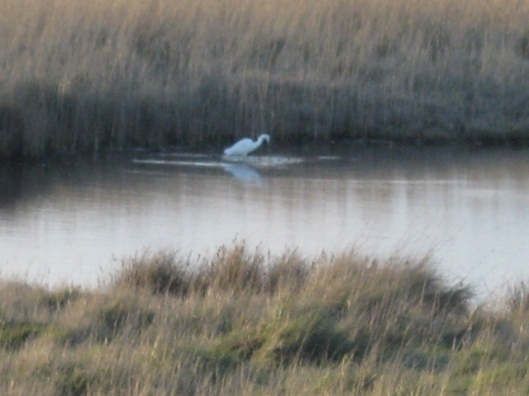 Little egret again.  Neither of these photos clear as I had to zoom so much to take the picture 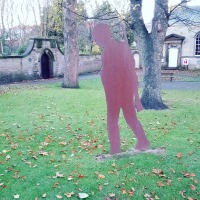 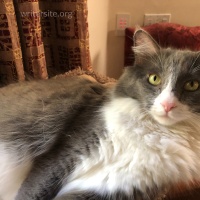 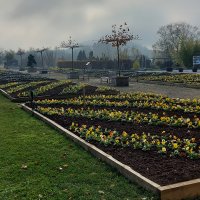