For several weeks I have been wanting to re-visit Minsmere.  Minsmere is a bird reserve run and owned by the RSPB (the Royal Society for the Protection of Birds) to which all four of us belong.  Minsmere is also the RSPB’s so-called ‘flag-ship’ reserve – the biggest and best in the country and we are lucky enough to live just a few miles from it.  There were three main reasons why I wished to go to Minsmere – I hadn’t been there for ages and missed it – I wanted to hear a nightingale again and there is usually a nightingale to be heard there at this time of year and lastly – I had heard that the BBC would be filming their Springwatch programmes there for the next three weeks starting on Monday 26th May and I wanted to go before they arrived.

R has been on annual leave this last week so we decided that we should go to Minsmere on Friday afternoon.  E and I had a very early start on Friday – up at 6.15am for me and 6.30am for her as she had a hospital appointment to go to in Norwich at 8.30am and we needed to leave the house at 7.15am to get there on time.  When that was over E decided she would like to do some shopping for books so we called in at Waterstones and she made a couple of purchases.  We then went to HMV to look at DVDs etc. and then we had lunch in a coffee shop.  We returned home via Beccles for more shopping.  Fortunately the weather had stayed dry for all of our journey.

R and I had a hot drink and a chat while I rested after my busy morning and then we set off.  There was a slight shower of rain as we drove there but it had all cleared away by the time we had parked the car in the carpark.  We decided to go towards the sea first and walked past the wildlife ponds near the Visitor Centre.  There is a sandy cliff behind the visitor centre where Sand Martins nest each year.  The Martins were very busy nesting and catching insects, flying low over our heads.  We were very pleased to hear a Cuckoo calling all the time we were there.  We hadn’t heard one for some years.

The rabbits on the reserve have no fear of humans

The path starts off over heathland and then carries on towards the sea on a raised bank through water meadows and marshland. 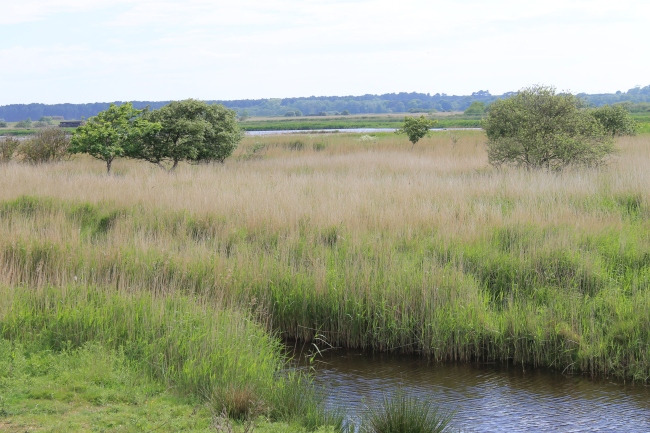 On our right to the south is Sizewell ‘B’ nuclear power station with Sizewell ‘A’ behind it.

On our left are the Coastguard Cottages on land owned by the National Trust.

This is looking back along the path we had just walked.  It has recently been re-laid and covered with gravel.  Crunching along these paths is a noisy business and all the birds disappear as soon as anyone steps onto them.  A lot of damage was done here during the storm surge in December and in the high winds and flooding during the winter; the RSPB have worked very hard trying to put things right again.  They also like to make as much of the reserve accessible to the disabled as possible – and – the BBC are filming one of the country’s most popular programmes here so it must look really neat and well cared for!

The entrance to the beach.

The dunes at the top of the beach.

At last we got to the sea.  The sky out at sea looked very threatening but overhead was bright and sunny. 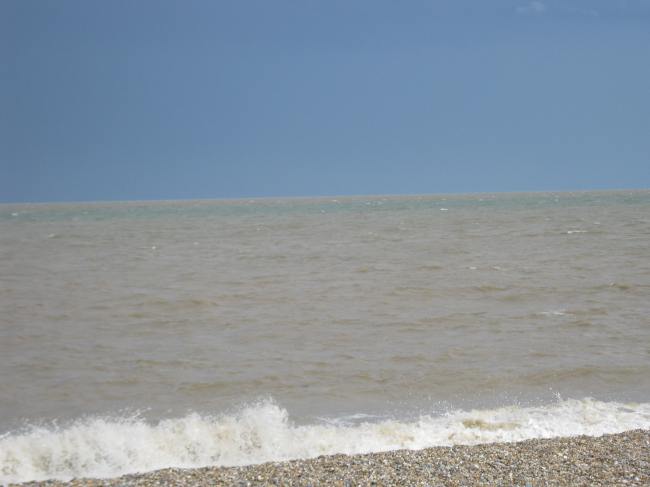 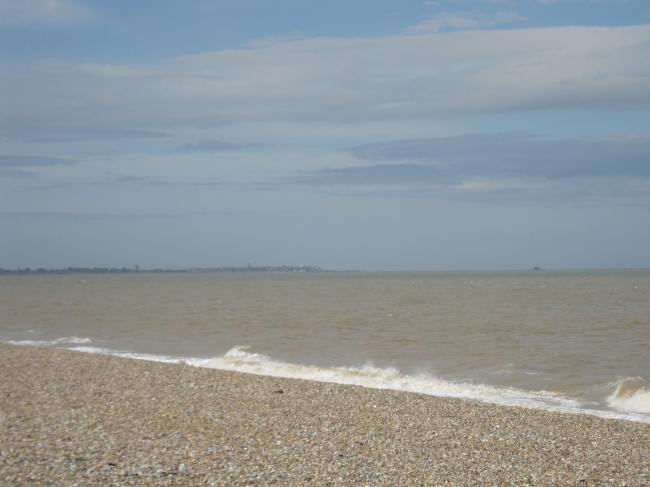 This is looking north towards the town of Southwold.  The lighthouse was flashing its light so conditions and visibility at sea mustn’t have been good.  I tried to get a photo with the light from the lighthouse shining but couldn’t.

Sea Kale growing on the beach

These are tank traps that were put here at the beginning of the Second World War.  If there had been an invasion it was hoped these might hold up the tanks for a while. There are many mementos of wartime in Britain, especially round the coast.

PD James’ book ‘Unnatural Causes’ is set here on the Suffolk coast.  One of characters in the book dies a most unpleasant death in one of the hides along the beach. 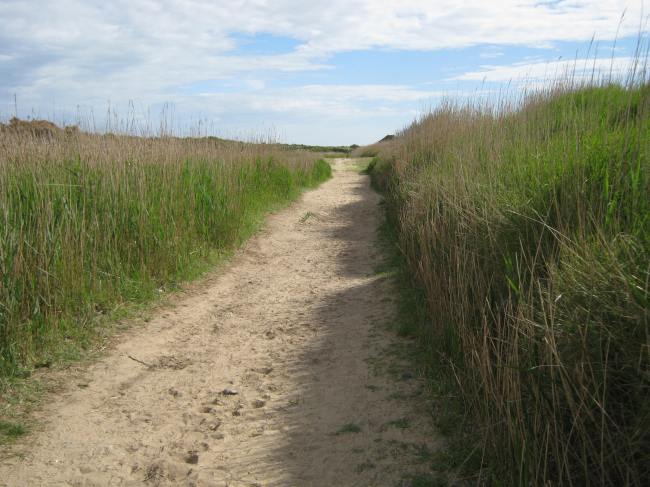 The sandy path that runs between the dunes and the reeds of the reserve.  We had walked by the sea for a while but an extremely stiff and cold onshore breeze was blowing so I escaped to the warm shelter of this path. 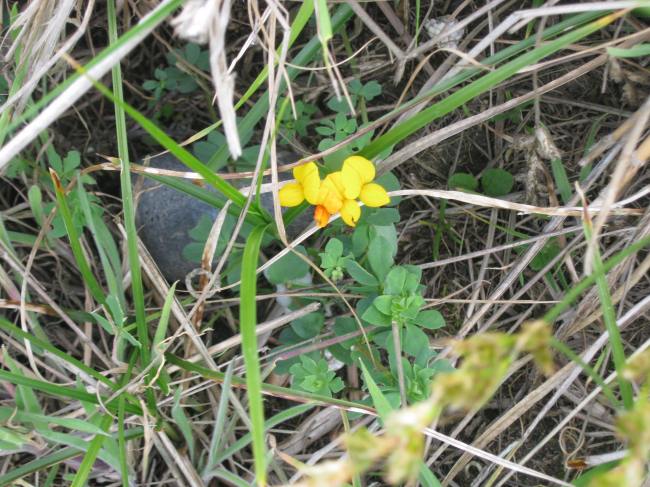 Bird’s-foot Trefoil growing at the side of the path.

We went into one of the hides further along the beach and sat and looked inland across the Scrape at the birds nesting, eating, wading and getting on with their lives on the reserve.  The hide we were in had been damaged some time over winter and had no roof but as the weather was so lovely it didn’t matter much.  The birds were aware of our presence and didn’t get too close.  We were still able to see a lot through binoculars but we weren’t able to photograph much. 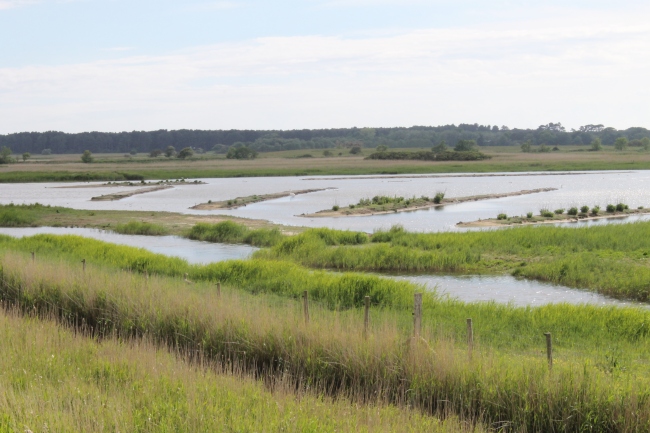 These are greylags with goslings.

A poor photo of an Avocet.  You can almost see its long upturned bill!

Mute Swans and other waders, ducks and gulls.

We eventually decided to move on and left the beach by another gate further south from the one we’d entered by.  There is a sluice there.  Water levels are monitored all the time.  The Scrape and lagoon need to have enough water in them but water levels must not get too high.  The RSPB works with other groups such as the owner of the nuclear power station and the National Trust to maintain flood defences. 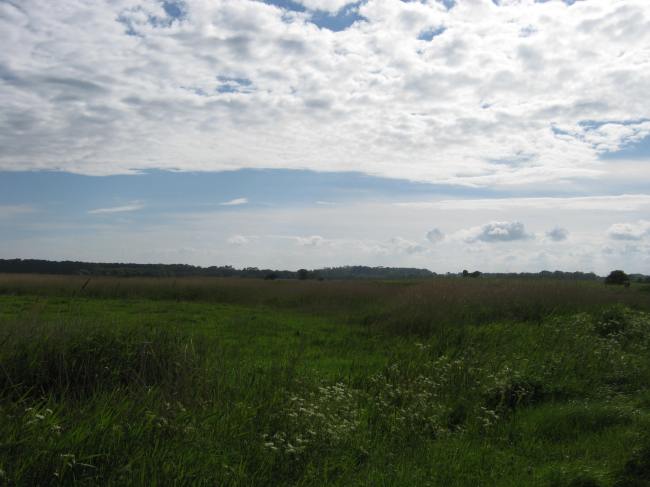 Views over the marshes. 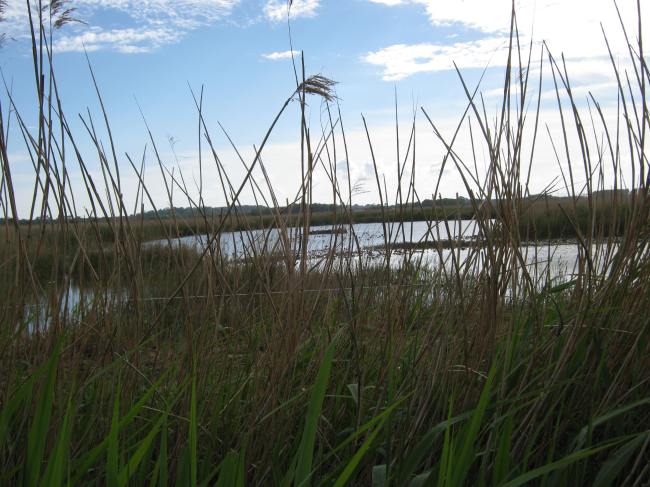 A photo of a Whitethroat singing from the top of a bush. We couldn’t get any closer I’m afraid so it’s not very clear. 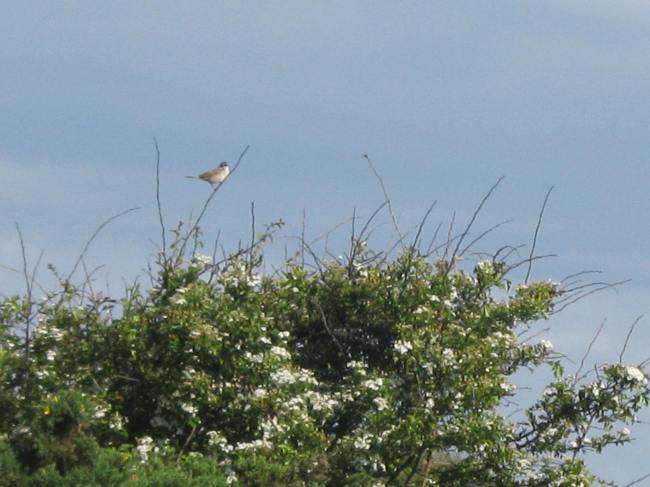 Highland cattle are used for marshland grazing.  They also use (or used to use) Konic Ponies for the same purpose.

We walked back towards the woods on the noisy path listening to Sedge Warblers and Whitethroats and many more birds along the way.  We saw that the whole reserve was wired for sound.  There were cables everywhere and cameras attached to nest boxes and every now and then we came across one or two people working in ditches and under bushes trying to fix something.  In the woods we also found a Pop-Up Café.

This was run by an enterprising East European couple.  R and I had the best coffee I’ve ever had.  It cost us £5.00 for two coffees which is very expensive for Suffolk but we did get two free pastries with it.  The girl put a pretty pattern on the top of mine.

After eating our pain au chocolat and drinking our coffee we walked a little way up into the wood and sat listening to the birds.  We heard a Bittern ‘booming’ which we were pleased about but unfortunately we weren’t able to hear a nightingale.  It was becoming late by this time and we decided to go home.  The BBC is only filming on Mondays to Thursdays so I may go back next Friday and just walk round the wood and try to hear the nightingale.  A and I walked here a few years ago listening to one singing and we even saw it too.  When I first moved to Suffolk in 1988 I lived in Halesworth and I used to be able to hear nightingales singing all night from the Folly on the edge of the town.  Sadly there are fewer Nightingales about and I haven’t heard one for about four years. 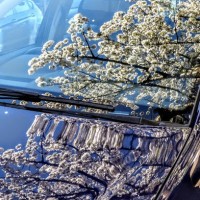 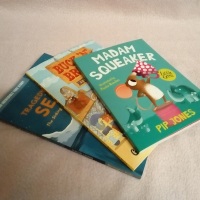 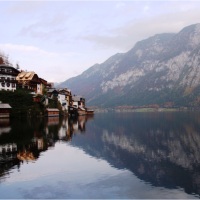